It's that time of the year again- Seattle Seafair.  And with the return of the Blue Angels, this annual right of summer has a more traditional feel.  What will also be similar to years' past, is extensive BUI patrols on Lake Washington the entire week.  Law enforcement has made a commitment to extensive patrols in recent years, and 2014 should be no different.  Boaters need to be aware, that impaired boating is not only criminal, but extremely dangerous.  However, at CKGW, we understand that good people can make mistakes and therefore we offer the following advice:

Operation of Your Vessel:

The Code of Federal Regulations (CFR) specifically turns command of Lake Washington over to the United States Coast Guard for Seafair weekend.  Pursuant to that delegation of authority, the USCG has authority to authorize local law enforcement to enforce any and all boating regulations.  Combined with  the fact that the rules of Lake Washington temporarily change for the entire Seafair weekend, and it means only one thing --- a free for all for law enforcement.

What most boaters don't know, because it's not highly publicized, is all areas, south of the I-90 bridge and to the southern tip of Mercer Island (usually marked by buoys) is a NO WAKE zone during the entirety of Seafair.  While many boaters know that while passing under the bridge, it is clearly marked NO WAKE, south of that (traditionally open waters) is also similarly restricted.

Essentially, this is your no wake zone: 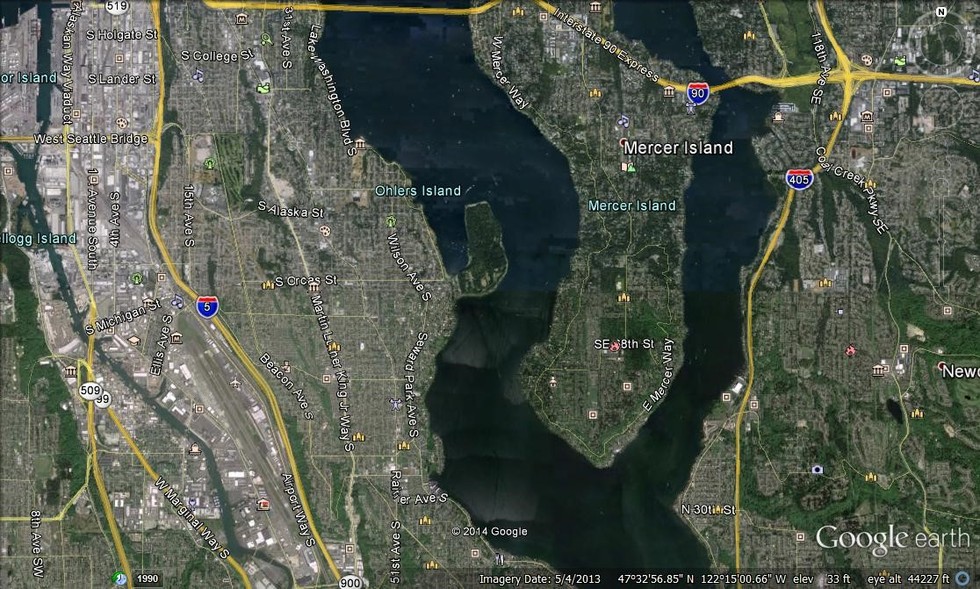 While the exact details of a NO WAKE zone could make an entire paper itself, what you need to know is what law enforcement is looking for.  Essentially, any vessel that is underway, which is creating a wake along with white water (prop wash) will be stopped if operating in that manner in the designated NO WAKE zone.  Literally 90% of all vessel stops that occur during Seafair weekend will be due to a wake violation.  Important to remember that if your vessel is underway and making a wake, no matter how small, you will be stopped.

Other common reasons for stopping vessels in the restricted area include:  bow riding and unlawful towing.  Even with open bow boats, it is unlawful to have anyone seated there while the vessel is underway and you will be stopped for that.  Also pulling inner tubes or rafts behind a vessel is strictly prohibited in the restricted areas and will result in a seizure of the vessel.

Unlike on the side of a highway, experience has shown us that BUI investigations are very abbreviated.  They typically involve removing the captain from his/her vessel and placing them on a police boat.  Once there, a very cursory investigation usually takes place, including field tests and a portable breath test.  What is important to remember is that Field Tests and Portable Breath Tests are completely voluntary and no boater is required to take them.  What this means to you is that you should politely decline to perform any testing including physical or verbal field tests and any portable breath test.

Please be aware that recent case law has ruled that a refusal to perform field tests can be used as evidence against an alleged impaired driver.  See State v. Mecham.  That being said, captains should be aware that their performance on the tests are unlikely to be video recorded and consequently the interpretation of that performance is left solely to the arresting officer.  For that reason, it is still the advice of this law firm that one should politely decline to submit to this testing.

If an operator is arrested, they will be transported to a temporary station, usually set up at Proctor Landing on Mercer Island, for breath testing.  An operator has the right to speak with counsel before making any decision about whether or not to submit to a test and before answering any question.  More importantly, a lawyer can also serve as a witness to the operator's state of mind and ability to communicate which could prove extremely valuable should your matter proceed to trial.  For this reason, it is the advice of this law firm that you immediately request an opportunity to speak with an attorney once you arrive at the temporary station.  Conversations with an attorney must be made in private, so privacy should always be requested prior to commencing that conversation.

Under recently amended RCWs, a boater does not have to submit to a breath test.  And while the statute specifically states that this refusal cannot be used in a subsequent criminal trial, it also states that should one refuse to submit to a test, they can be assessed a class 1 civil infraction, with a penalty of $1000.  Consequently, speaking with an attorney prior to making this critical decision is imperative for anyone in custody for suspicion of BUI.

Also important to note, should an operator refuse to submit to a test, the officer may obtain a search warrant and conduct a blood draw without the consent of the captain.  Therefore, it is critical that an operator speak with an attorney prior to making this decision in order to determine the likelihood that a warrant will be obtained.

Boating is a social activity that has rich tradition in the Seattle area.  Seafair is a celebration of that.  And since it is a social activity, the use of alcohol is very prevalent.  That being said, boaters must be aware that law enforcement has dedicated considerable resources to curbing impaired boating.  Consequently, everyone on Lake Washington this weekend is under the microscope.  Police are looking for reasons to stop your vessel and they will investigate BUIs with all their power and might.  Remember, the only true way to avoid a BUI is to not consume any alcohol or drugs while operating your vessel.  But we understand that bad things can happen to good people, and should you end up under arrest for BUI, we can help.  And remember, boat safe and boat sober.

Bill Kirk has been named a Super Lawyer by Washington Law and Politics Magazine every year since 2003. He currently serves on the Board of Regents to the National College for DUI Defense and is the President of the Washington Foundation for Criminal Justice. Bill is one of only two attorneys in this state to pass the National College's Board Certification Exam.